Hello all! For Spring Quarter, the Compost Pilot Coalition meetings will be taking place on Wednesdays at 5pm in SRB 1103. Please come by and get involved! We are currently discussing ways to expand the project and educate more people about the composting that is being done on UCSB's campus. We would love to hear your input! Also, a few members of the CPP will be graduating this year, so there are leadership positions that will have to be filled in the upcoming months. This is a great opportunity to make a difference on your campus!
Posted by Compost Pilot Project at UCSB at 4:46 PM 2 comments

Congratulations to Jami Nielsen for winning the CPP Cartoon Contest! Here is her winning design: 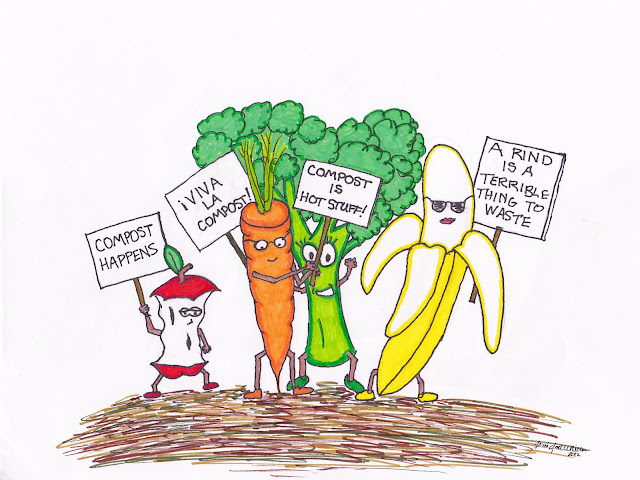 Design a humorous cartoon fruit and/or vegetable for a Compost Pilot Pilot advertisement that encourages composting on campus. The winner gets a free CPP t-shirt and a free meal at Root 217! Drawings can either be submitted through email to compostpilotucsb@gmail.com or they can be dropped off during CPP Coalition meetings, Thursdays at 5-6pm in SRB 1103. All submissions due by February 23rd!

Posted by Compost Pilot Project at UCSB at 10:45 PM 0 comments

The day has come! Composting is here!

There are now six locations on UCSB's campus where you can compost: 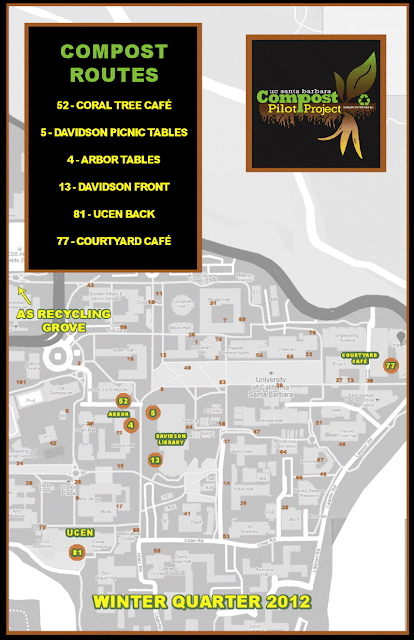 Make sure to keep a look out for the green compost flags! 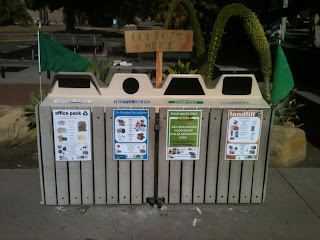 Posted by Compost Pilot Project at UCSB at 10:19 AM 0 comments

Are you interested in taking part in the coalition or becoming a prospective volunteer?
Compost Pilot Project t-shirts will be printed next week!!
(Deadline has been extended!)
Instead of purchasing a new t-shirt, drop off a solid white t-shirt that you already own to 6622 Trigo Dr or to the EAB Office (located on the top floor of the Ucen) from Monday (1/16) to Friday (1/20) with your name written along the neckline in sharpie.
Then, come by our coalition meeting on Thursdays at 5:00 PM in SRB 1103 to pick up your newly-printed CPP t-shirt!
Posted by Compost Pilot Project at UCSB at 12:13 PM 0 comments

Check out the Compost Pilot Project in the local Nexus!

By John Leach
Published on October 20, 2011
The UCSB Associated Students Recycling Committee is adding six compost bins to recycling receptacles across campus next quarter to divert a larger portion of the university’s food waste.
The Composting Pilot project will retrofit up to 12 compost bins on campus to comply with state sustainability standards. Governor Jerry Brown signed AB 341 into law earlier this month that aims for California to recycle 75 percent of its waste by 2020.
According to A.S. Recycling Committee Student Coordinator Philip Jankoski, the group is educating students about proper waste procedures.
“The bins are strategically chosen to be near eateries around campus — outside the Arbor, Courtyard Café, Coral Tree Café and the UCen,” Jankoski said. “Volunteers are going to stand next to the bins and explain to people the project and what can be composted, things like that. We’re only doing food scraps, no other types of compostable items, for the pilot project.”
Composting Outreach Coordinator Molly Neubert said effective instruction is essential to ensure the bins are properly used.
“We’re going to see if it’s going to work,” Neubert said. “We have to see if it stays uncontaminated. Since we’re collecting food waste, things like napkins and utensils would contaminate the compost.”
The Green Initiative Fund is financing the project as a trial to determine whether campus-wide waste diversion is a feasible project.
Jankoski said the committee is optimistic about the project’s success due to positive reception toward the dining common’s compost program.
“Our success is contingent on participation and enthusiasm of the students; the campus seems to be pro-compost and pro-recycling, so it’s making sure everyone’s aware of the program that’s the challenge,” Jankoski said. “Seeing the success of the kitchen waste pre-consumer composting in the dining commons, we decided this would be a viable option. It generated a lot of buzz about a post-consumer option for composting.”
Additionally, the measure requires all commercial businesses, institutions and apartment buildings to initiate recycling programs.
The organization expects composting to spread throughout the university’s facilities if the preliminary phase is successful, Jankoski said.
“If we are able to get the campus educated and really generate knowledge on campus, then Spring Quarter a lot of the campus eateries are going to switch to compostable cutlery and containers,” Jankoski said. “We’re working with some grad students on reusable containers too. We want to emphasize the use of reusable containers over one-use ones.
A.S. Recycling is also hosting its Grow a Gardener workshops allowing students to work alongside local farmers and learn about growing crops.
Neubert, a fourth-year psychology major, said the events inform students about sustainable agricultural techniques.
“Local farmers come to teach about little topics like how to grow your own garden,” Neubert said. “[A famer] from Fairview Gardens came and everyone left with seeds from him.”
Posted by Compost Pilot Project at UCSB at 12:46 PM 0 comments

LEADERSHIP Opportunity with the CPP: Looking for underclassmen/women to represent the CPP at the 2012 CHESC at UC Davis.


Requirements:
1. Involvement with the CPP both Winter and Spring quarter 2012 in a leadership position
2. Some public speaking experience

Posted by Compost Pilot Project at UCSB at 1:24 PM 1 comments